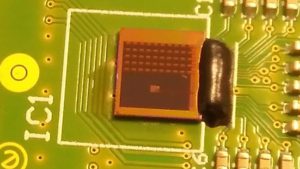 At the moment, personal safety devices are limited to co-workers of medical imaging and radiotherapy facilities and to persons, working with ionizing radiation or particles in an industrial context. IoT will allow anyone to carry such device and to collect much more statistical data.

Caeleste joined an International Consortium under the Eurostars umbrella together with South Korean Wireless Solution provider FC Unwired and Biotech company Equis & Zaroo to develop an affordable personal radiation dose monitor that will be used in hospitals by patients and medical personnel during medical treatments involving nuclear species. In a later stage, the device will also be used by personnel in industrial facilities when using ionizing radiation or high energetic particles. After the professional rollout, a further integration of the device into smartphones and other communication devices can be envisaged in order to make very detailed radiation maps around the globe.

The WPRD (Wireless Personal Radiation Detector) is a detector based on standard CMOS silicon and uses Caeleste’s patented photon-counting techniques. Via a traditional scintillator interface, radiation particles are counted and transferred via Bluetooth communication to a centralized system, which can be a regular smart phone. The WPRD is capable of detecting nuclear species ranging from Alpha and Beta particles to Gamma, Neutron and Medical X-ray particles with a lowest possible detectable dose rate of about 0.3uSv/h. The detector will run on a single 3.3 V battery with a 1 year lifespan. Prototype silicon has been verified in the Caeleste labs and detailed radiation and calibration testing in collaboration with the Belgian Institute for Nuclear Research (SCK-CEN) has been planned for this
summer.

Eurostars supports international innovative projects led by research and development – performing small- and medium-sized enterprises (R&D-performing SMEs). With its bottom-up approach, Eurostars supports the development of rapidly marketable innovative products, processes and services that help improve the daily lives of people around the world. Eurostars has been carefully developed to meet the specific needs of SMEs. It is an ideal first step in international cooperation, enabling small businesses to combine and share expertise and benefit from working beyond national borders. Eurostars is a joint program between EUREKA and the European Commission, co-funded from the national budgets of 36 Eurostars Participating States and Partner Countries and by the European Union through Horizon 2020. In the 2014-2020 period it has a total public budget of €1.14 billion.

We are looking for an experienced Business Development Manager