Bart Dierickx a pioneer of CMOS image sensors, co-founder and CTO of Caeleste, explains in the latest MVPro influencer Q&A, the company’s ability to deliver custom-made sensors and their benefits.

The advantages of custom made image sensors

BD: We started in 2006 as a design house. Nowadays we are a one stop-shop for custom made CMOS image sensors and pixel arrays of any kind. Our core activity is still design of such arrays starting from customer’s specs. However, Caeleste has broaden its activities to testing, characterization and production.

MVPro: The company specialises in custom made image sensors. What does a custom-built sensor offer?

BD: Custom design offers you the possibility to optimise and focus on target specifications. If you compare it to cars, off the shelf cars are mass produced and you buy them at your dealer.  They are beautiful pieces of engineering, but they must comply to a large number of criteria at the same time to serve a broad market. The fastest off the shelf car is a snail compared to a custom designed Formula 1 car, the most ecological commercial vehicle is no match for a custom designed World Solar Challenge participant.

“BD: Take any specification of an existing state–of–the–art image sensor, say speed, dynamic range, noise equivalent contrast or radiation tolerance etc. and make that 10x tougher. That is what we do.“

MVPro: What is the demand for these, from who and what are the benefits?

BD: Our customers are often leaders in their field and want to reach or stay on top in performance.

MVPro: How do these differ from a ‘normal’ sensor?

BD: Take any specification of an existing state–of–the–art image sensor, say speed, dynamic range, noise equivalent contrast or radiation tolerance etc. and make that 10x tougher. That is what we do.

The process on designing and delivering a customized cmos image sensor

MVPro: Can you explain more about the process on designing and delivering a sensor?

BD: It all starts with a thorough analysis and understanding, which are the key desired performance parameters. Which ones are trivial and which ones can be sacrificed or be traded-off. Then we follow the conceptual or schematic design followed by the geometrical design and eventually the Silicon foundry process.

MVPro: Recently, you’ve been working with the European Space Agency (ESA). How are sensors used in the space industry?

BD: There are roughly four categories of image sensors and pixelated sensors in general use in Space. The most common are the telescope focal planes, being large area, large pixels arrays, often in nonvisible wavelengths. Attitude sensors are cameras that are part of the stabilisation and orientation (attitude) of the satellite, then we have housekeeping cameras, which are small and serve just to remotely inspect whether the spaceship is in good condition. The most famous examples are the cameras to monitor the bottom of the space shuttle for damage by isolation or ICE during take-off. Finally, one has instrument sensors, such as focal planes of spectrometers or other non-imaging instruments.

MVPro: Given the recent launch of the Mars Rover Perseverance and SpaceX – are we witnessing a new era in space exploration and if so, what impact will this have for Caeleste?

BD: We are (as far as I know) not for these projects. It is satisfying that there is a continuing and growing interest in space missions, each of them requiring very few image sensors. Yet often the specifications are outside the already existing base of state–of–the–art sensors and need the developments of something outperforming the previous generation.

MVPro: Aside from the space sector, what other markets do you expect to see significant growth in custom-made sensors?

BD: Space, although prestigious and visible to the public, is not our largest market. This is rather the medical and life sciences domain, subdivided in many smaller niches. There are still new developments in medical imaging technology with higher resolution and faster CT equipment. We also expect a fast growth in in vitro and in vivo diagnostics with optical means and we assume that we are only coming near to an explosion of “lab-on-a-chip” or “lab in a package” solutions, where optics and photonics are the preferred means for the diagnostics.

MVPro: The company will reach its 15th year next year – are there any plans to mark this?

BD: For our 10th anniversary we celebrated in various ways. We started the Electroniade “The unofficial championship of electronics” open to all people, companies and research institutes which has been successful since. We might do something similar. 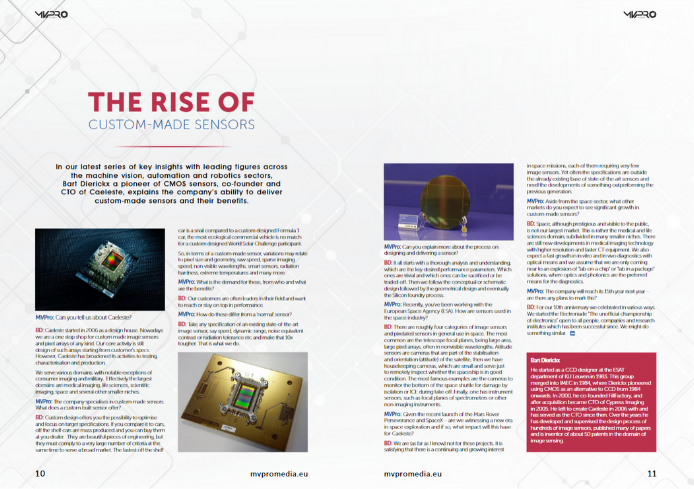